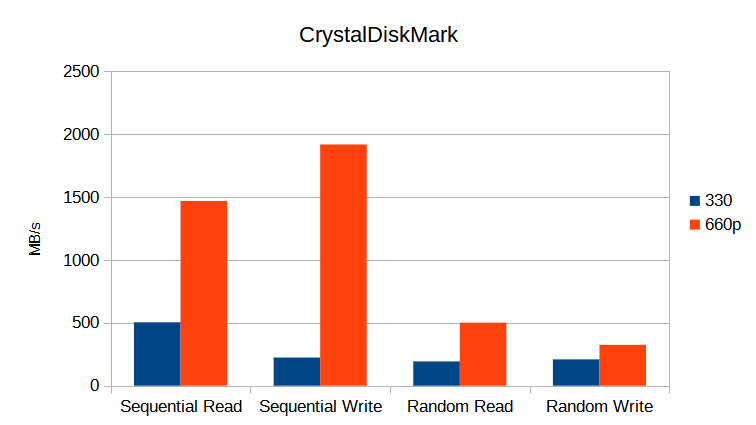 I have Intel SSD 330 Series since September 2012. In the same year Windows 8 was released. That’s a lot of water under the bridge in the world of tech.

How does this ancient SATA SSD hold up in today’s world of M.2 NVMe drives?

First, a word of caution. I’m comparing against M.2 Intel 660p 2TB which contains personal data that I can’t remove. According to Intel’s PDF the amount of SLC cache depends on used capacity.

Here is a chart (semiaccurate.com):

The 660p is 57% full. That corresponds with 101GB SLC-cache. I doubt any of the benchmarks exhausted the cache thus I’ve probably tested just the cache.

As you can see there is a massive increase in sequential speeds with 660p. Random read has more than doubled. Random write has increased slightly.

DiskBench is a real-world test and there is a 30% improvement with 660p but not as major as synthetic benchmarks. Reality is often disappointing….

A wonderful increase in both scenarios.

From what I can see the newer drive (660p) is an improvement in all tests.

In synthetic benchmarks, the speeds have multiplied! It feels great to look at the numbers.

In real-world test of copying files the increase is still nice (30% is nothing to sneeze at). I haven’t tested loading times, boot times and other real-world scenarios.

To wrap it up, I’d say it’s worth it to upgrade from SATA to NVMe storage for performance gain.