Making Friends at Reversed in Vienna

What’s the best way to spend two days of public holiday and a weekend? Gamedev conference of course!

Here in Czech Republic (Czechoslovakia, if you are an older person or coming from Croatia. Hello Aleksandar!) we recently had two days of public holiday. I don’t even remember what are we celebrating, but what’s important is that we don’t have to go to work. Right?

Anyway, instead of hiking, visiting relatives, going for a swim or any other boring past time we (me and Tomáš) were doing something much more fun. What do we consider fun? Pitching our game at Big Indie Pitch. Naturally (or rather natürlich since we went to Austria, Vienna). Yeah and we like meeting fellow devs 🙂

If you’ve read this blog before, you already know I am all about gamedev conferences and events (such as game jams). But this is the first time WesTurn our fast-paced turn-based game made it across the border. Hurray!

It’s actually funny, how things tend to snowball. We’ve met Tom De Roeck, the main organizer of Reversed, in Třeboň [ˈtr̝̊ɛboɲ] during Anifilm GameDay. Then we’ve exchanged a couple of emails regarding Game Access in Brno (I wrote about Game Access 2018 too) and we’ve met there. And since we stayed in touch we were invited for Reversed.

Reversed has a bit of a different concept than other conferences. It starts with a game jam (Day 0). First, two days are business focused (The Big Indie Pitch on Day 1 and talks on Day 2). Remaining two days are open to the public (Day 3 and 4).

I did not manage to attend the jam and we left before noon on Day 4. Nevertheless, it was a valuable experience. Why? Read further to find out.

WesTurn was selected for The Big Indie Pitch so Tomáš managed to pitch it to a couple of noteworthy people aka judges:

This professional photograph was taken by me while circling the “pitching zone” and snapping photo after photo.

It might look like it, but Craig Chapelle from Pocket Gamer isn’t facepalming! He’s thinking deep about the strategy in order to beat Martine Spaans (FGL / Tamalaki).

Continuing to the second table we got our moderator Simon Drake checking time (time pressure!) in the background. Mei from UPLTV is captivated by the game (or at least during this exact moment I took the photo ^_^).

Read further to learn who won (spoiler alert: it wasn’t our WesTurn).

When in Austria you need to have some schnitzel. And we did just that after the Big Indie Pitch to chillax and comfort our rumbling bellies.

We’ve set our table in the afternoon. Talked with fellow devs and did a bit of networking handling over our stylized business cards. 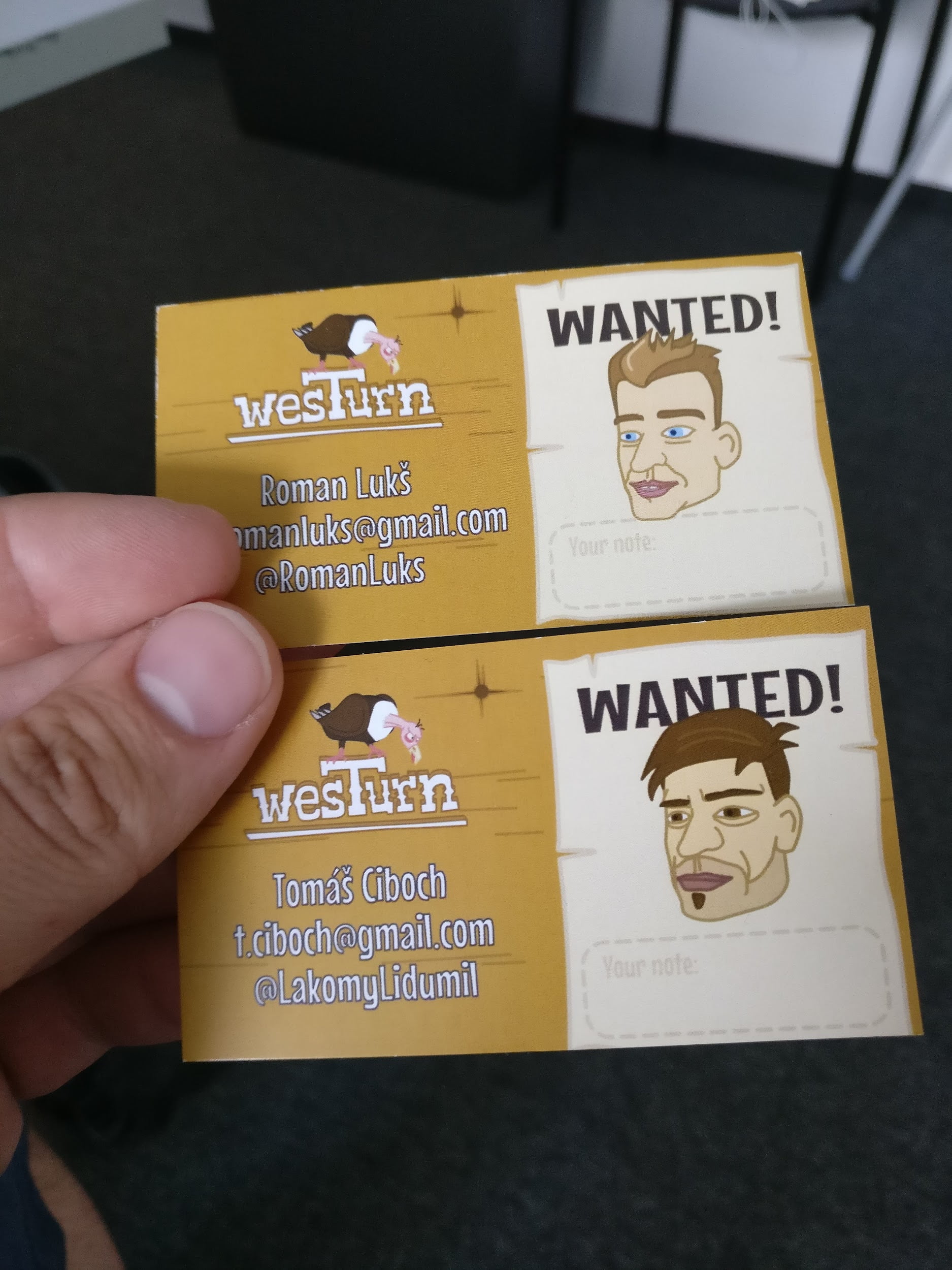 And we had dinner with our Czech colleagues. Pavel Jiri Strnad was too hungry and busy picking to waste time looking at the camera. And he’s busy making Lost Hero – story-based RPG which can be played in both single-player and in coop. It even has a built-in map editor to create and share game maps 🙂

Next day (Friday) was all about the conference (talks and showcasing games to other gamedev professionals and indies). I’ve only been to two talks, but both of them were informative even though a bit short and could’ve gone into more detail.

The first talk was How The Business Model Of Your Game Affects Your Future In The Industry by Ben Zuckerer, CipSoft. He talked about different business models – Ads, subscription, Free 2 Play. One takeaway from the talk was that you should design the game with the business model in mind.

Another thing was that you’ll lose money on 5 to 10 game projects. And then 1 will succeed. So you should budget accordingly. 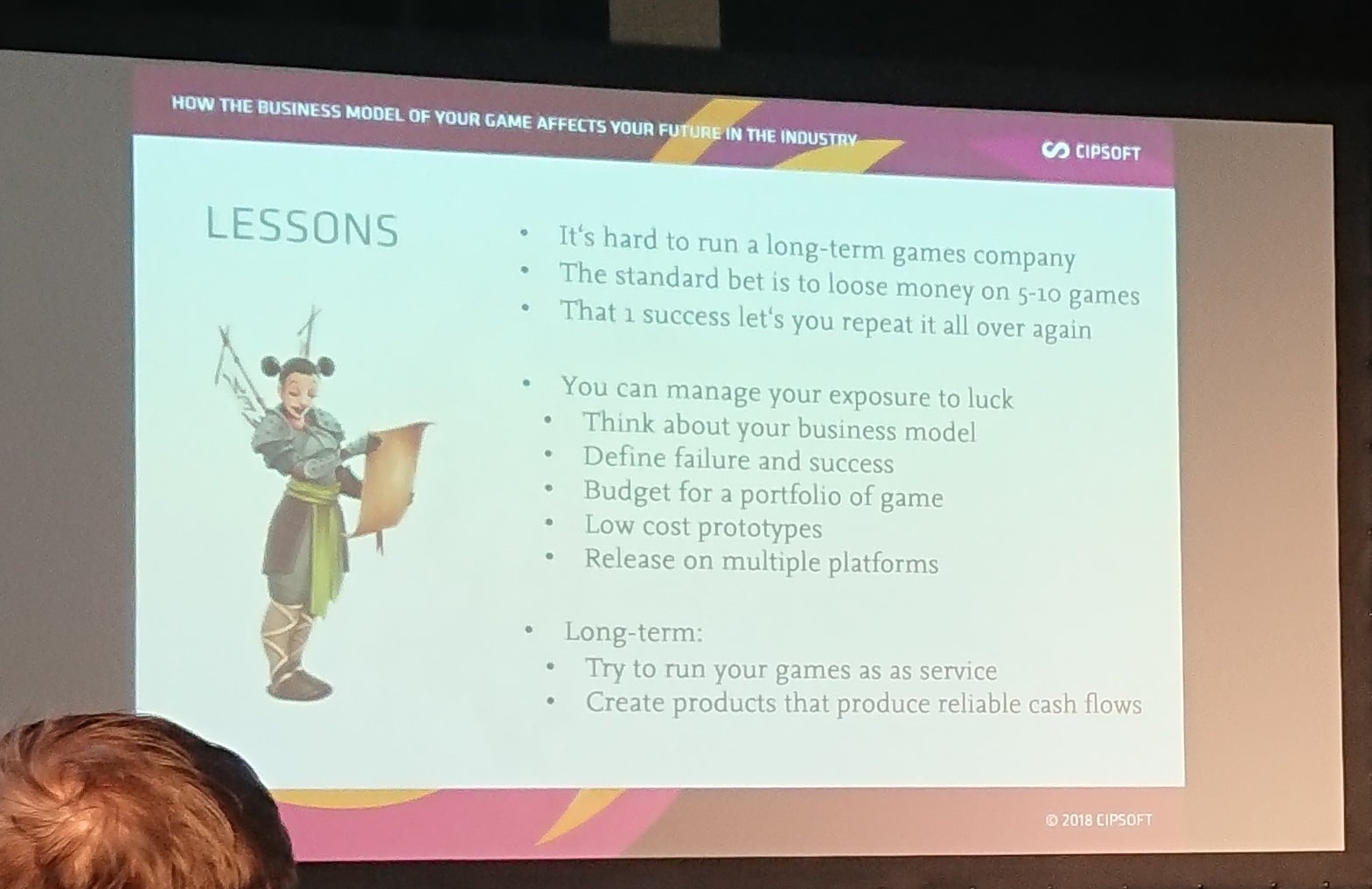 The second talk I’ve seen was Social Media And Influencer Marketing On A Budget by Michael Schade, Rockfish Games. There were a couple of things I learned from Michael. First thing was, that you should add tags to your Youtube videos and assign the category.

I have applied this lesson when I’ve uploaded ASMR video of a dog who chews on a watermelon and it seems to work (usually my videos have only a few views, this one has already over 4k). But I’ve posted the link to Reddit, so I’m not 100% certain it’s just the tags.

The second big takeaway was cross-marketing with other devs. Michael was working on EVERSPACE – visually stunning rogue-like space shooter. They were doing a Kickstarter campaign. But what was really interesting was that Chris Roberts, the guy who works on Star Citizen, said (and they used it as a testimonial on their KS page): “the game itself looks like a whole lot of fun. The game is more action-focused than ours, and should allow for some great, fast-paced gameplay that’ll stand alongside Star Citizen, No Man’s Sky, Elite and all the others!”

When another big name from the industry (and a competitor of a sort) endorses your game, you know you’re on a right track. That’s why I’m really happy we’ve met the team behind Blood will be Spilled. It’s a gorgeous platformer set in the wild west with a turn-based combat. And all the characters in the game are insects. You follow the story of Jack – a mosquito bounty hunter. You guessed it! You can suck the blood out of your enemies!

I got a little bit side-tracked. EVERSPACE looks amazing and they took advantage of that by posting short gifs on Reddit and Imgur. These two platforms work wonders and you get a ton of traffic for free. Some of the gifs went viral.

Another takeaway was supporting streamers by tweeting and sharing when they go live or published a new video. Michael said they were watching streamers themselves to find out whether they are any good. If they were, they started to interact with viewers in the chat. Gradually building relationships with them, giving them keys for a giveaway.

You need to understand what’s important for these content creators (streamers, youtubers) and support them accordingly. 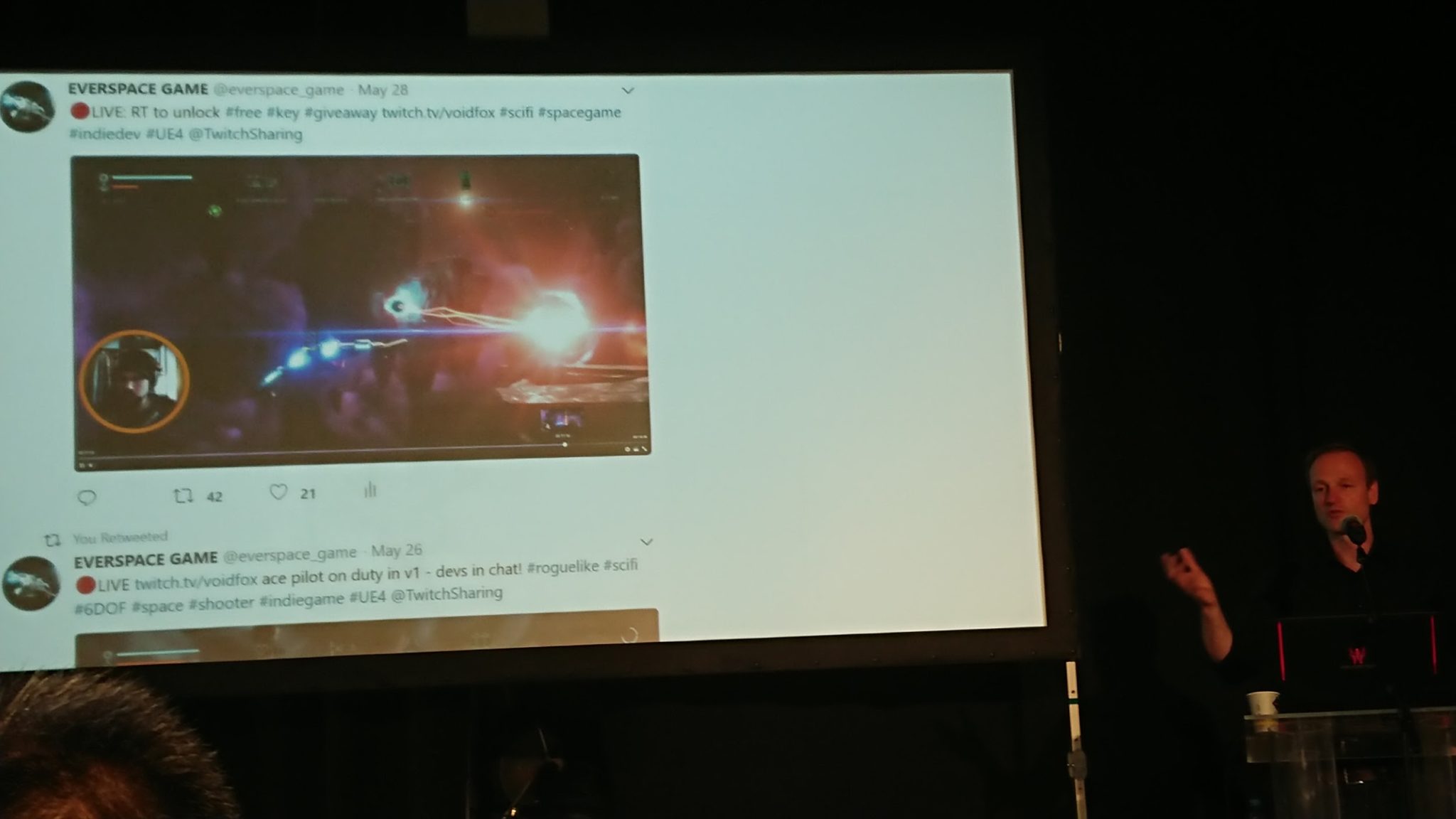 Last bit was to give incentive to followers on social media to retweet posts (key giveaways).

So, that’s it. I haven’t seen any more talks. In the evening we went to a city center to relax by the river. 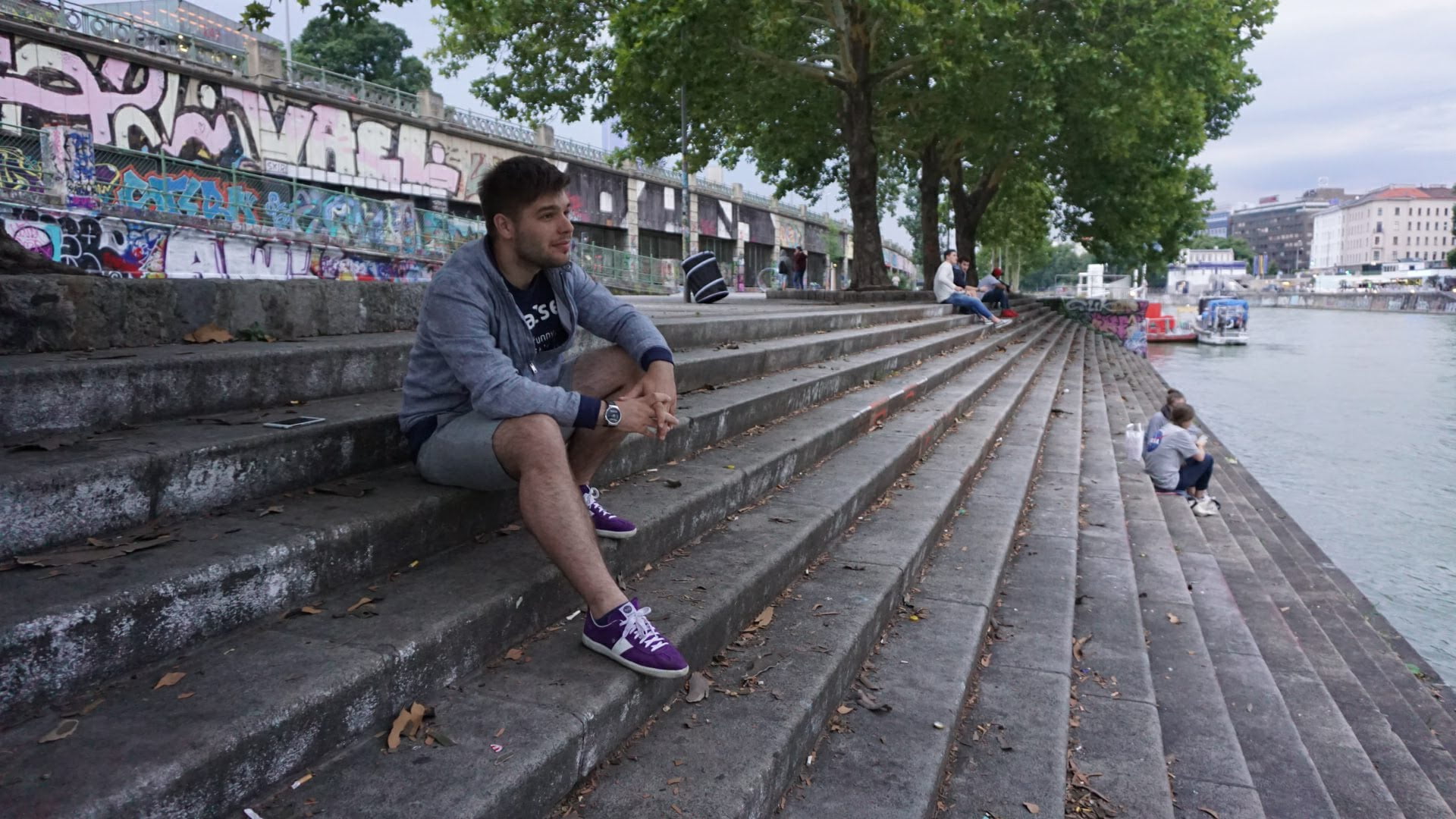 We took some photos. Vienna is pretty nice! So shiny!

Next day (Saturday) was all about networking and checking out games. Ivan from Doublequote Studio and us played each other’s games and exchanged valuable feedback. 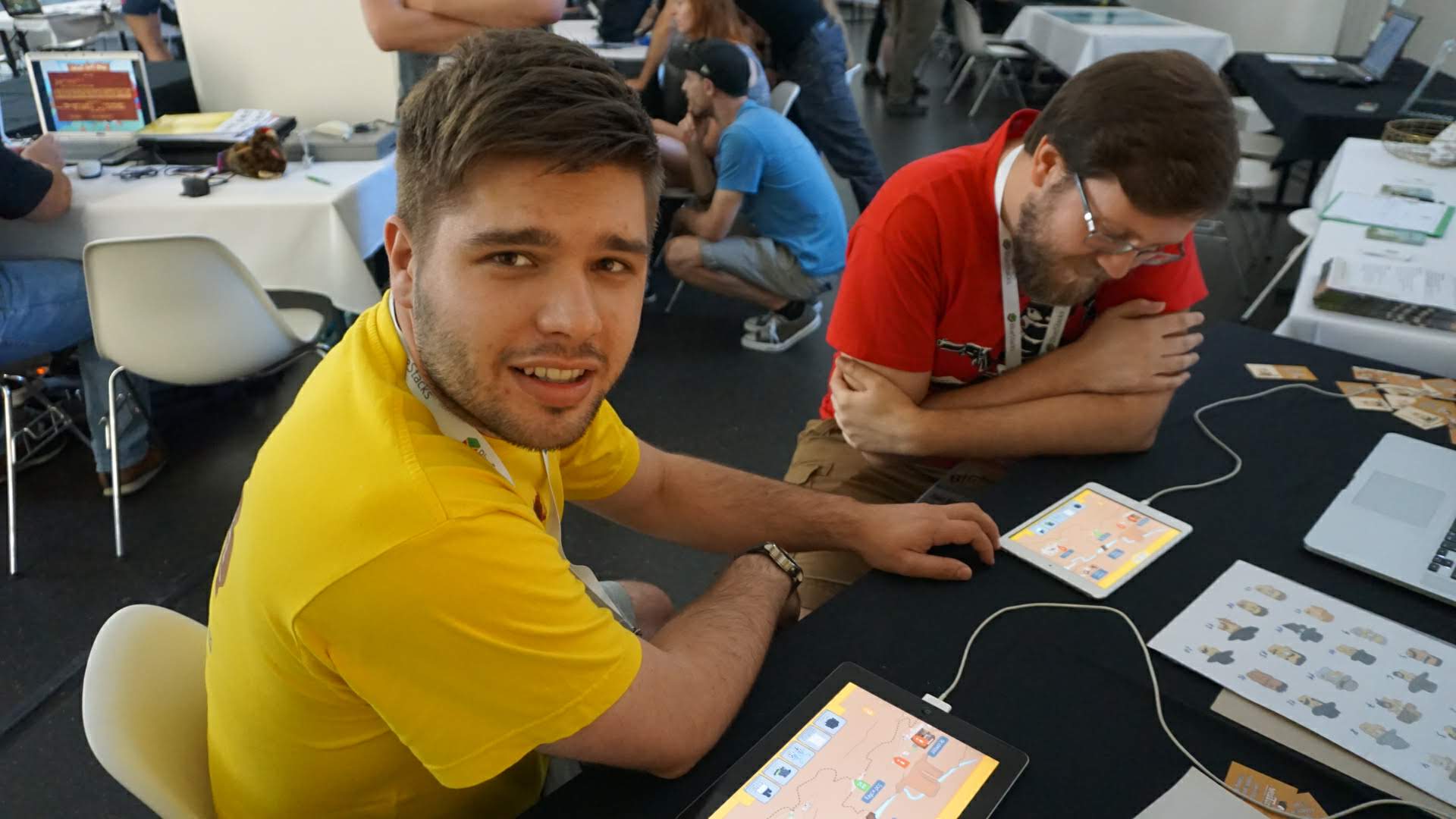 I was also greatly inspired by their table. They are using one color consistently across all their materials. They even brought their own red tablecloth. And look at that laptop! It’s all the same color! Genius.

Second amazing table belongs to AncientGame and their game VALUE: 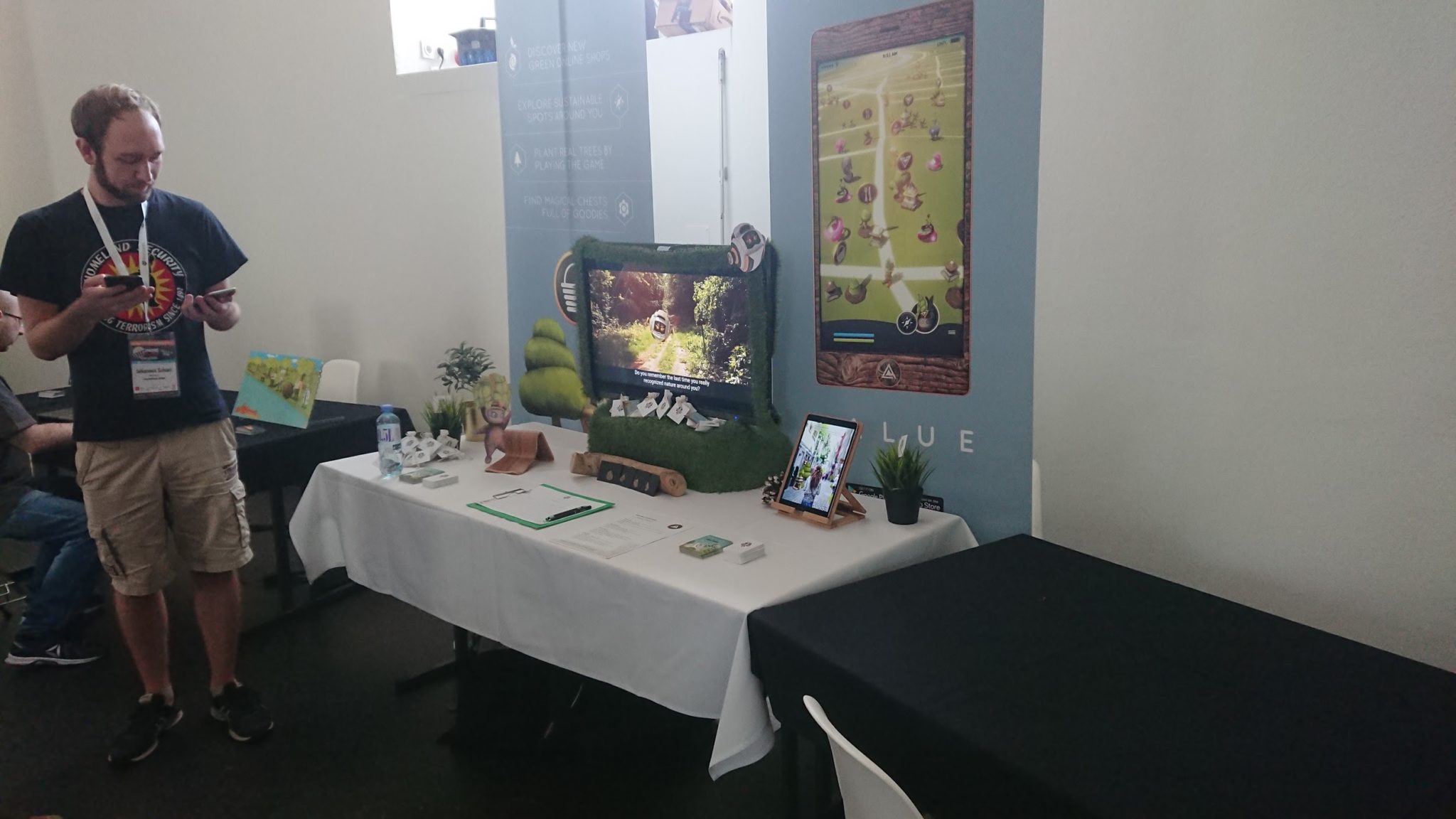 Are you from Vienna? Check it out. It’s like Pokemon GO for people who care about the environment. By playing you can help to plant new trees.

I have also reunited with my friends Franz and Aleksandar from BEST summer course – Why play good games? Create one! In Chisinau 2013 (psst I’ve made a game there). See what’s Aleksander working on right here. I especially like Speed Limit: Stage 2.

In the evening we went to the Prater with a couple of guys from the conference, had some drinks. It was a good day.

Sprichst du Deutsch? Check out this article about the conference by Cerealkillerz. And there is one from Screaming Pixel as well.

And now… the Grand Finale. The winners.

<drummer realizes people staring at him and stops playing>

<Gandalf-like voice> …”These are the winners:”

And that’s it, folks.

Congrats to all winners. Congrats to Klaus and his Weaving Tides and to Anton and his Alchemist’s Castle. See you at the next conference 🙂