Hello all!
There was a Game Developers Session on 17–18 November 2017 in Prague and I was there.

Last year of 2016, I went as a volunteer to help with the event – registration, cloakroom, catering and all that.
Here, look at all those beautiful people (and one Roman–goblin in the back). 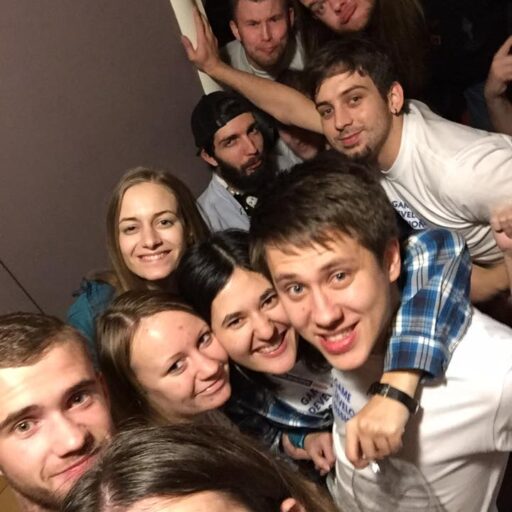 I made a couple of new friends 🙂 Overall, it was an amazing event.

Naturally, I wanted to come again.

And since there was a great excuse to go, that is getting feedback for our game WesTurn (almost 1 year in making), we bought tickets.
And who’s we you ask. It’s Tomáš, Tomáš and Me. Yeah, we got two Tomáš-es in a 3 men team 😀

Few months back on a Game Access (What the hell is Game Access), we got a great feedback and managed to improve the game a bit and we were curious what would people at GDS think.

After first day of #GameAccess we have filled more than one paper of amazing feedback in our guestbook (and only … https://t.co/KParrCXBVN pic.twitter.com/ffY8xQ7vy8

There was a second paper with my terrible handwriting with all the bugs and stuff. It was very valuable to get feedback from various people, because sometimes you as a developer do not see flaws. I believe there is a term for it – perhaps writer’s blindspot or gamedev’s blindpost in this case 😀

GDS 2017 was great!
We showcased WesTurn on Indie Game Expo (part of GDS) and got a great feedback again. We met plenty of fellow devs, guys from press and a few audio magicians. I also tried out some of the games (Violet Cycle, Mothership, Pixel Soldier or LostHero). Unfortunately, we did not manage to see all the talks or try out all the games we wanted. Having your own booth/desk and the conference is a busy work 🙂 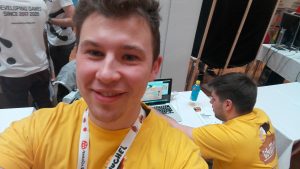 Here is me, busy smiling, while Tomáš wastes time preparing the game…